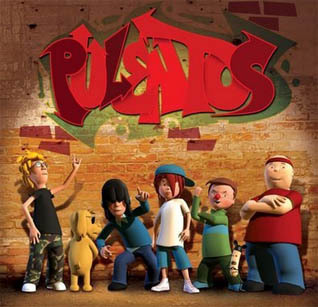 Los Pulentos is an All-CGI Cartoon made in Chile produced by Tercer Hemisferio that was emitted on Canal 13 between 2005 and 2009. It was created by the journalist Werne Nuñez and the musician Sebastian Silva. The series had two seasons between 2006 and 2007 with 2 last episodes of the second season made in 2009 as well having The Movie in 2007. It became very popular in Chile during the Turn of the Millennium at the point now they're Cult Classic in this country.

The series is about a group of five children who all have in common a love for music, especially hip-hop. They all have a hip-hop band and they make songs, their songs appear Once per Episode. Also, they're accompanied by their mascots, a talking dog with sunglasses and... a living sausage with mouse ears who also talks, which is supposed to be a mouse. Also has a Spin-Off focused on Walala in 2009.