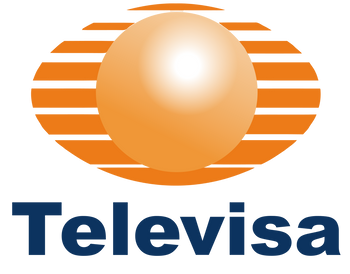 Televisa is the largest Spanish-speaking media company (or if you decide to add up the other companies owned by Grupo Televisa or by any of the Azcárragas, a Mega-Corp) was initially founded as Telesistema Mexicano in 1955, in Mexico City, by unifying three different channels under said banner and then exerting control over several smaller TV stations in the rest of Mexico as time went by. Its four over-the-air channels (those available without suscription to any cable company) are:

Its cable channel lineup (which is available practically in nearly every cable system on Mexico, except for Megacable, which removed its channels on 2016, and Dish, owned by competitor MVS which doesn't give a damn for said channels) goes as this:In addition to all of this, they also formerly owned the Radiópolis group comprising 6 radio stations in Mexico City whose formats (news/talk "W Radio", regional Mexican "Ke Buena", top 40 "Los 40" and sports "W Deportes") are syndicated nationwide, one of Mexico's most popular soccer teams (Club América) and largest stadium (Estadio Azteca, a name they've tried to play down for obvious reasons), a few media networks outside of Mexico, a few other businesses not related to media at all, and formerly a low-cost airline.

In The '60s and The '70s, during the heights of the Cold War, Televisa was the government's mouthpiece and received a lot of flak regarding the Tlatelolco massacre (this, like the Mexican-American War, is a delicate issue amongst Mexicans, so avoid discussing it unless you are acquainted enough with anyone), which was completely covered up. Also, during the 1970s, it spawned one of its most beloved shows — Chespirito, which in turn spawned El Chavo del ocho and El Chapulín Colorado, both producing their fair share of memes that are still preserved into Latin American pop culture.

The '80s were the network's Glory Days, many of their most known celebrities were launched in this era, and their best -and worst- programming was shown. Telenovelas such as El Abuelo y Yo, Carrusel, Bodas De Odio, and Cuna de Lobos being the most talked-about shows during The '80s, and in The '90s many telenovelas such as Esmeralda, Marí­a La Del Barrio, Corazón Salvaje, and La Usurpadora raved to the point that many of them were incredibly popular in Eastern Europe, and it is said that during the Kosovo War, militias used to make truces only to watch these telenovelas. Also prominent of this period were the "Historical Romance" telenovelas, holding love stories in the midst of the important events of Mexican history; examples of these works were "El Vuelo Del Aguila" (Mexican Revolution), "La Antorcha Encendida" (Mexican Independence) and "El Carruaje" (post-French Intervention), and perhaps they were more known due to their attention to detail back then.

However, during The '90s, as the Mexican government privatized public TV network Imevisión and granted the license to the Salinas Pliego family creating competitor TV Azteca, Televisa found itself having to change to adapt. Add to this the fact that Emilio Azcarraga II died, and you had a major turning point not only in the company, but also in tv entertainment in Mexico. This included profoundly dumbing down even more its content to compete in the ratings war with the then young upstart TV Azteca, a trend that continues to this day. It even attempted to rename the national stadium in Mexico City it owned, Estadio Azteca (named in honor of the ancestoral Aztecs), as what was said to be a memorial to a little-known soccer and network executive who died, but was a naked attempt to get back at TV Azteca. Rare for Televisa, nobody in the nation outside of Televisa bit on the new name, and when the sons of the executive jumped to roles at TV Azteca, the network admitted defeat and grudingly returned to the previous Estadio Azteca name.

Televisa was also, during the 1990s, one of the main contributors to the Anime Boom of the Nineties in Mexico (alongside the other main channel, TV Azteca), showing Dragon Ball, Dragon Ball Z, Ranma ½, Pokémon, and Digimon (though seemingly, like TV Azteca, they only noticed the massive amounts of violence and UST in some of these cartoons until 2000, when Televisa found out about the moral panic that many of these cartoons caused, particularly from a TV Azteca talk show that linked anime to satanism using poorly-made arguments, and decided to pander to the moralist crowd by pulling most of them from their regular programming, although DBZ would survive the panic and stay a part of Televisa's schedule well into The New '10s.

The 2000's are ambivalent regarding their results: They started to diversify their entertainment options by starting to make American and British-styled series, which were good but unfortunately they had failed due to bad management and ratings. Their news department has lost some credibility after they decided not to report on the kidnapping of the politician and former candidate Diego Fernández de Cevallos (to the point that even Jacobo Zabludovsky, former star anchor of the network, called them out on it). Their soapies weren't nearly as good as they were in the pastnote  a notable example here is the 2009 remake of Corazón Salvaje, which due to Executive Meddling, two very disliked actors getting the leads and sloppy writing, tanked so hard that people in Esmas.com (Televisa's now-defunct official public portal) celebrated when it was announced that they would pull the plug on it earlier than expected., and with the advent of the Internet, they have become extremely overprotective of their intelectual properties, to the point of handing legal threats to people who posted even a single clip of their programming to the internetnote A notable, if hilarious example, was their threat to the Spanish sport streaming website Rojadirecta

, where the legal threat was so sloppily written that Rojadirecta's webmaster just laughed it off. and they also tried to press into the Mexican Congress the infamous "Ley Televisa" (which was fortunately revoked due to public and independent media outrage). Most of those aspects are blamed on Bernardo Gómez Martínez, who became vicepresident of the company after Emilio Azcárraga Jean became its CEO (as a matter of fact, Emilio Azcárraga Milmo - Father of the current CEO Emilio Azcárraga Jean and previous CEO before dying - really disliked Gómez Martínez, and thought of him as being a greedy Smug Snake). On the flipside, the good thing of said diversification is that they have been pressing for the use of HDTV in all of Mexico's public channels, given that most of the cable channels have not succeeded into going there, their other services getting better, and the seemingly unending stream of subpar soapies ended with the release of the miniseries "Gritos de Muerte y Libertad", in celebration of two centuries of Mexican independence, which was very well made and well researched for a change (although, like virtually all historically themed soaps, it got dismal ratings).

As of 2016, Televisa is facing a deep financial downturn caused by not adapting to the cultural and technological transformations of The New '10s. It all began when, back in 2012, Televisa decided to collude with the PRI to make Enrique Peña Nieto the ruling president by speaking nothing but good about him and speaking all evil about his opponents. They didn't really bother about putting up any such thing as a masquerade, because apparently they underestimated the then-recent growth of Facebook and Twitter or they thought they would never notice — but they did, and as a result Televisa's popularity tanked very hard among the millenial crowd that used social media. To complicate things even further, the British newspaper The Guardian published in 2013 a thorough report detailing every single one of the acts of corruption between the PRI and Televisa in the 2012 elections, and then 2014 saw the premiere of a movie that caused Televisa's popularity to sink even more — The Perfect Dictatorship, a political drama film featuring a thinly-veiled recreation of Televisa's collusion with the government and what they did to help make Enrique Peña Nieto the president of Mexico, which quickly became famous and successful after some attempts to stifle its distribution backfired very badly. Eventually, as Peña Nieto's government became deeply unpopular, Televisa turned against it and by the end of his term in 2018, its programs openly mocked him.

Televisa's recent decline was also thanks to a new competitor in the audiovisual media market: Netflix, which arrived to Mexico in 2011 but gained popularity around 2014 as broadband connections, smartphones and TV sets with a Netflix app became widespread. Given these conditions, Netflix quickly spread among the population thanks to its greater convenience (no need to deal with a cable TV operator, you just need to sign contract with an ISP, press Play and It Just Works), its greater assortment of international TV and movie hits by just pressing Play on the remote control, and the fact that Televisa was already so loathed among the Mexican middle-class youth that Netflix became popular by just not being Televisa, and as a result lots of middle-class Mexicans outright dropped their traditional TV services in favor of the new "internet TV" that was Netflix. Then the analog blackout took place in 2014, leaving out not only millions of poor Mexicans unable to afford a decoder but also leaving out many middle-class Mexicans who just didn't bother to get a digital decoder because Netflix was just that convenient (and it was not Televisa). With its numbers dwindling as more people jumped into Netflix, Televisa tried to jump into the video streaming bandwagon in 2016 by pulling their content from Netflix and moving it to their brand new video-on-demand service called Blim... but it backfired as the millenial crowd which was supposed to be their target market just ended up laughing in their faces on social media. And to add up, when Televisa removed their series from Netflix, the shares value of the latter increased, with Netflix making fun of the absence of Televisa's content. And then, Telmex CEO Carlos Slim decided to undermine Televisa's (and TV Azteca's) market share even further by purchasing exclusive broadcasting rights for the 2016 Río de Janeiro Olympics and putting them up on his own video streaming service Clarovideo as well as in public television networks and cable channels ESPN and FOX Sports, which ended up having a positive reception due to actually showcasing the Olympics instead of stale jokes and soccer.

By the end of The New '10s, however, Televisa rebounded and got successful hits again, remaining Mexico's top-rated network even when factoring new competition coming from its longtime rival TV Azteca and new networks such as Imagen TV and Multimedios. La rosa de Guadalupe remains its current flagship product, followed by new, serialized soap operas and other programming, while its Blim service grew into a credible competitor. Both Televisa and Azteca also got the rights to the Olympics back.

But on a more positive note regarding this media conglomerate, at least their sports commentators are really good (especially "El Perro" Bermúdez), managing to generate their own memes — "GOOOOOOOOOOOOOOOOOOOOOOOOOOOOOOOOOOOOOOL!" is just one of the many. They also popularized soccer in all of Mexico, since before the sixties most of the teams were located in central Mexico, and the dominating sport was baseball. Televisa had controlling stakes on some of the football league's teams and so had an interest of promoting the sport over all others.

And that's Televisa in a nutshell.

Televisa programming is seen in the U.S. & Puerto Rico on Univision. The mentioned simulcasts above in the US are carried by Univision as part of Televisa's distribution contracts with Univision. In 2021, the company announced that it will be selling its content assets to Univision so it could focus on its Pay-TV and Internet business. (Televisa will also mantain the station licenses for the main four networks)