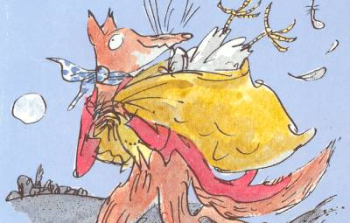 "When those boys are out on the beat,
I'm gonna catch what I'm gonna eat,
With my longdog. I am a poacher!"
— Show of Hands, "Longdog"
Advertisement:

An inversion of Evil Poacher, some older works, particularly fairy tales and Folk Music, pitch a Loveable Rogue poacher against an evil fat-cat landowner in a Peter Rabbit-vs-Farmer MacGregor kind of relationship.

These are generally from a time when even kids' stories admitted that animals have to be killed for people to eat meat (and this kind of poacher always does hunt for food, usually for his starving family or to share with the community), and the conflict is more about the morality of claiming ownership of natural resources.note In European history, clashes between landowners and poor countrymen who only wanted to feed their families sometimes turned brutal on both sides; the conflict earned the nickname of "The Poaching Wars".

, the Roguish Poacher hunts prey animals like rabbits, fish, and game birds (the only quarry the two might compete over is deer). Where the Evil Poacher is a Glory Seeker who wants to put trophies on his walls, the Roguish Poacher wants to feed his family and maybe scratch a living selling the meat and skins.

Naturally, in Real Life, it's more complicated than this. For example, how to classify a poor "third-world" hunter poaching endangered animals on a game reserve in order to sell bushmeat, ivory, luxury furs, etc., on the Black Market would be much more open for debate. But fiction is usually more willing to take sides.

As this guy is still a criminal, he'll either have a Sympathetic Inspector Antagonist or the police/sheriff/gamekeeper will be in the pockets of the Corrupt Hick landlord.

Subtrope of Classical Hunter and Karmic Thief. Often a Guile Hero, who may be portrayed as Just Like Robin Hood. Compare Hunter Trapper. Sympathetic portrayals of The Rustler may also fall under this trope, with the Cattle Baron as the bad guy.