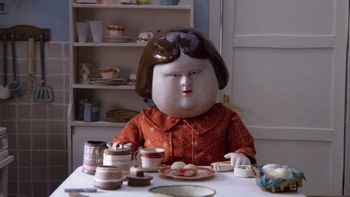 The animation is stop-motion, with the human figurines made to resemble porcelain dolls. The film is a true story about Ingrid Olderöck, an agent of the Chilean secret police (the Dirección de Inteligencia Nacional, or DINA) in the 1970s, under the dictatorship of Augusto Pinochet. The film opens with Olderöck on a plane—with a bullet hole in her head. The film cuts back to Olderöck at some point in the past, playing fetch with her dog, but with the animation framed and shot in a way that suggests something very ominous.

Ingrid lives alone, with her dog. She sometimes visits a house, where she, and the dog, go into the basement. Eventually it's revealed that the basement is a torture chamber, and unspeakable crimes are happening there.

In other words the Animation Age Ghetto is averted.