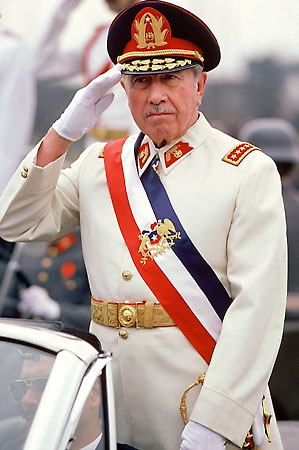 He had almost as many bank accounts as he had snazzy uniforms.
"By the end, Chileans had become wearily used to the way in which he fell dramatically ill whenever the workings of justice took a step nearer to his archives or his bank accounts. Like Franco, he long outlived his own regime and survived to see his country outgrow the tutelage to which he had subjected it. And, also like Franco, he earned a place in history as a treasonous and ambitious officer who was false to his oath to defend and uphold the constitution. His overthrow of civilian democracy, in the South American country in which it was most historically implanted, will always be remembered as one of the more shocking crimes of the 20th century."
—Christopher Hitchensnote Member of Socialist Workers Party
Advertisement:

Augusto José Ramón Pinochet Ugarte (25 November 1915 – 10 December 2006), better known to the rest of the world as Augusto Pinochet, was the dictator of Chile, reigning as president of the Government Junta of Chile from 1973 to 1990. He was the commander in chief of the Chilean army from 1973 through 1998. He assumed power in a coup d'état on 11 September 1973, overthrowing the Unidad Popular government of Salvador Allende and ending civilian rule a week before its 48th anniversary.

Born in 1915, Pinochet rose through the ranks of the Chilean Army, reaching the position of Commander-in-Chief in 1973 following the resignation of his predecessor and mentor, Carlos Prats Gonzalez. Prats had been unwilling to join a coup and was later assassinated in Buenos Aires. Pinochet ascended to the post in the midst of considerable national turmoil. Allende’s socialist coalition government had narrowly won office in a three-way election promising a sweeping platform of land reform and nationalization.note The agrarian reform had begun with President Jorge Alessandri, almost a decade earlier, and his successors were expanding it. As a result, 6,400,000 hectares were expropriated by the year 1973, there were also attempts to illegally appropriate land by peasants associated mainly with left-wing parties by armed means, resulting in the death of both landowners and peasants. This also led to a reduction in national production. In addition to the mounting economic and constitutional crisis, he faced a quiet undercurrent of discontent within large parts of the military, which believed Allende was going to lead Chile down the path of a Marxist Revolution. His actions, which culminated in a month-long visit by Fidel Castro in 1971, had also alarmed the Nixon Administration, and in particular Henry Kissinger, who saw Allende as a personal enemy. With this in mind, the USA imposed sanctions to asphyxiate Chile's economy ("Make it scream" - in Nixon's words note To this day the influence of the United States in the coup is discussed, since the Allende government was overthrown before the USA managed to form strong ties with the military leadership. US association with the dictatorship is clearer.) and lent its support to Admiral José Toribio Merino and Air Force General Gustavo Leigh’s plot to remove Allende, a plan which was altered at the last minute to include Pinochet, until then, they did not know which side he would be on since he had been vital in defending the government in the "Tanquetazo" (attempted coup) on June 29 of the same year, as were others loyal to General Carlos Prats. On September 11th the military surrounded and bombarded the Presidential Palace. Allende killed himself and the junta assumed control of Chile, establishing the precedent that 9/11 is a bad day for democracy the world over (except for Europeans, that is).

Initially power was shared among the members of the junta, but within a year Pinochet, the last man to join the coup d’état, managed to maneuver his way into the Presidency, eventually ousting the other junta leaders. An arch-conservative and proponent of laissez-faire economics, Pinochet reimposed social order through strict authoritarian controls, put the army in charge of all government positions, and handed control of the Chilean economy over to a group of US-educated libertarian economists known as the “Chicago boys” after their association with the University of Chicago. Fans of Pinochet will point to the substantial economic growth as proof that his rule was not all bad. Non-fans will point out that Chile's economic growth lagged somewhat behind the South American average throughout Pinochet's term in office, partially—but perhaps not entirely—attributable to the decline in the price of the main export, copper, and the rise in fuel prices. While Venezuela benefited from expensive oil, countries like Chile had difficulties importing it. If the comparison with oil exporting countries is removed, there are those who say that Chile is above the average. The country also suffered two later economic crises, and what economic growth it did experience was very uneven, with a small fraction of the population enjoying the newly-created wealth.

Of course, no amount of economic growth can cover the fact that Pinochet implemented incredibly harsh anti-opposition laws during his regime. Between 1,200 and 3,200 people were killed, up to 80,000 were interned, and up to 30,000 were tortured by his regime, including women and children.

Much of what went on in Pinochet's prisons was utterly sickening, with stories of dogs being trained to rape prisoners, and rats being inserted into the vaginas and anuses of detainees not being the worst of them. The "parrilla" ("electric grill"), which involved prisoners being strapped to tables and tortured with electric shocks, was so ubiquitous that President Michelle Bachelet admitted she was treated better than other detainees because she was not subject to them. Other inhuman acts included dragging half-dead victims into parking lots and running them over with trucks repeatedly, throwing people into vats of human sewage, flogging people to death with chains, throwing people off helicopters into the ocean or the Andes and the technique known as the "telephone", which involved slamming hands on the victim's ears until they were deaf.

Many of the victims simply disappeared into thin air, never to be seen again, enduring their prolonged confinement, torture and executions out of the public eye. Pinochet lent the services of his secret police, the DINA, to the pan-South American "Operation Condor", a joint operation launched by Pinochet himself between the Argentine, Paraguayan, Uruguayan, Brazilian, Bolivian , Peruvian and Chilean juntas that wanted to end communist activity (violent and peaceful) throughout the continent.note  For him there was no peaceful communist in South America. Estimates of the deaths caused by this politicide vary, some reaching 60,000.

Contrary to the popular imagination in the 1988 plebiscite, the return to democracy was not debated, that had already been decided by Pinochet himself, so there would be elections for parliamentarians, what was defined was whether he would continue to be president or a new one would be elected, winning the option "No" that implied presidential elections. He continued on as Commander-in-Chief of the Army until 1998, when he retired to become a Senator-for-Life. Having pardoned himself of all charges, Pinochet was immune from prosecution on all human rights violations. The subsequent centrist governments would maintain and even expand his economic policies, including regimes led by Allende's own Socialist Party. While he was put under house arrest on a trip to Britain in 1998, he made it home in 2000…only to be arrested on seventy-five charges of kidnapping from which he had not pardoned himself. The new government believed Pinochet’s return had damaged the country’s reputation, and pressed on with the case. Pinochet’s lawyers put up a strong defense, claiming the general was senile and could no longer remember the crimes he had committed. Before the case could actually reach trial, Pinochet died on the 10th of December, 2006, at the age of 91. He remains a controversial figure to this day; while most people across the political spectrum revile him he has defenders both within Chile and without, who argue that his regime was a necessary evil or even a positive good.

Works featuring Augusto Pinochet and his regime include: