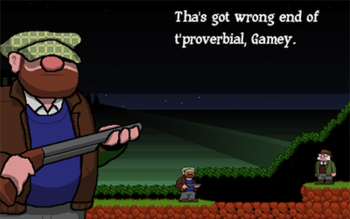 Poacher is a 2D side-scrolling Metroidvania made by Ben "Yahtzee" Croshaw. In a departure from his previous titles, it is his first game not to use the AGS engine.
Advertisement:

The game stars Derek Badger, an unflappable Yorkshireman who poaches game for a living. One night, whilst out blasting rabbits with his new shotgun, he is confronted by his best friend and arch-nemesis, Archibald the gamekeeper (aka "Gamey"). When Gamey accidentally falls down a hole, Derek goes down to help him out. He finds himself in a strange Underworld, inhabited by flesh-eating rabbits and spirit beings. After joining up with a spirit named Rebecca, it isn't long before Derek discovers himself involved in something far bigger than a simple rescue.