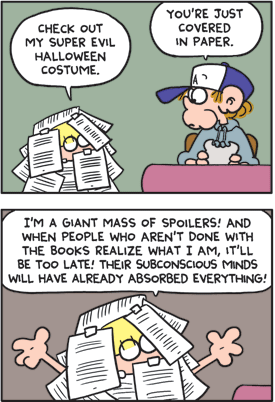 Perhaps a bit on the nose.
Advertisement:

A character or thing in which most of its tropes are spoilers. Saying anything substantial about this character/thing at all (in worst case scenarios, this can even be just its name or existence alone) will reveal spoilers about the work they feature in, which makes talking about them/it difficult. Some fans reconcile this by using euphemisms, others by avoiding talking about it at all, others just by placing a warning that the following will contain massive spoilers.

Can overlap with It Was His Sled if the work in question is old or culturally ingrained enough that pretty much everybody already knows about the various plot twists or Late-Arrival Spoiler if the marketing for a later installment of a series spoils an earlier installment. Often will overlap with Sir Not-Appearing-in-This-Trailer if the marketers don't decide otherwise. Also may overlap with First-Episode Twist, where knowing the very premise of the series gives away a surprise.

Also, this is not about characters that are involved in many plot twists but the mere existence of the character within the narrative is a spoiler itself, that makes it impossible to talk about the character without spoiling the plot.

This is a Spoilered Rotten trope (on character pages), that means that EVERY SINGLE EXAMPLE on this list is a spoiler by default and most of them will be unmarked. If you don't know what that means, then you should probably take a good look at the page image for reference. It'll all become clear.