Web Animation / The Nightmare before Christmas Who: Skellington's Revenge 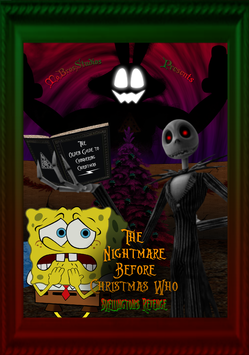 'Twas a long time ago,
Longer now, than it seems.
In a place that perhaps you've seen in your dreams.
For the story that you are about to be told
Took place in the world of YouTube Poop.
Now, you're probably wondering where MoBrosStudios has been.
If you haven't, I'd say it's high time you'd begun...

A YouTube Poop created by MoBrosStudios, The Nightmare Before Christmas Who: Skellington's Revenge

is Mo Bros Studios' longest and by far most complex video, clocking in at a whopping 21 minutes.

The story begins on October 28, 2012, when Mo Bros Studios' Halloween special has been cancelled. Despondent, Jack Skellington stumbles upon the upcoming Christmas special, and decides to take it over. Meanwhile, in Bikini Bottom, Sandy introduces Spongebob to the concept of Christmas, and soon all of Bikini Bottom is getting ready for the festivities - even characters from other franchises join in the fun. However, Jack will stop at nothing to claim a holiday of his own, and ends up making a Deal with the Devil that may ruin the holidays for all.

Considerably Darker and Edgier than many of Mo Bros' productions, Skellington's Revenge is notable for its' extensive use of effects and video editing, particularly in the second half of the video. For the characters featured here, see the Character page.

Mo Bros Studios: My heart goes out to my family, my beloved girlfriend, and to all my new supporters here online. I thank you all so much for standing with me as I poured my soul into this production. Happy holidays to you all. Sincerely, Mo Bros Studios.