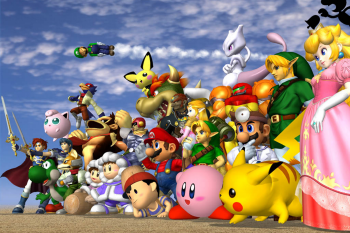 Let's see... Fire Emblem, Yoshi's Island, Pokémon, Super Mario Bros., Donkey Kong, EarthBound (1994), The Legend of Zelda, Star Fox, Metroid, F-Zero, Kirby, Game & Watch, and Ice Climber. All in just one game, and this game isn't even the best example from its franchise.
"So many heroes from so many dimensions! This is pretty cool!"
— Jenny Wakeman, Nicktoons: Attack of the Toybots
Advertisement:

A crossover that involves characters from more than two works of fiction. More often than not, this is a mash up of series which do not have a strict sense of continuity or a clear Universe Bible. To lessen canon-faulting, especially with series that do have strict continuity, a new 'neutral' setting is made that offers equal footing for all the characters. Sometimes characters are anthropomorphise in various ways so that they can interact better. It also becomes more viable the farther you get from canon, such as one-time TV specials and especially video games. As Story Arcs have become more prevalent, this practice has somewhat lessened, with shifts to strict Verse building and explicit references.

This rarely occurs in live action shows, unless a production company can be formed that holds copyrights to everything, or where Public Domain Characters are involved. Thus, this is much more common in animated works — although you can generally expect The BBC to pull one out of somewhere when Children in Need or Comic Relief rolls around.

This trope has become increasingly common in video games, especially those involving both licensed and original properties. These games, depending on how far or how deep they mine, can have interesting effects on the fiction chosen. Many long-gone and/or forgotten Humongous Mecha shows, for example, often get a new lease on life, or even a brand-new sequel or remake, after making an appearance or two in a Super Robot Wars game. Similarly, the Fire Emblem series was finally brought over to the US to great success after two of its characters made an appearance as unlockable fighters in Super Smash Bros. Melee. Crossing over with Real Life, Racing Games with licensed vehicles (such as Forza, Gran Turismo or Need for Speed) are always this trope, due to the fact multiples of vehicles are licensed from wildly different manufacturers for use in-game.

And it should be clear that this trope is trivially easy to pull off in Fan Fic, since fan-fiction is almost always unlicensed and unofficial, meaning the creators are free to put whatever characters they want, from as many (often wildly) different universes as they want, and however they want into their stories without worrying about those pesky trademarks and character licensing issues getting in the way. That said, it's much rarer to pull off this trope well in fan-fiction.

The name is a pun on the video game genre of "massive(ly) multiplayer online game".

This trope is Older Than Feudalism. The Argonautica by Apollonius Rhodius (3rd century BCE) features nearly every ancient Greek mythical hero all going on a quest to find the Golden Fleece.