WMG / Friends and the High Council 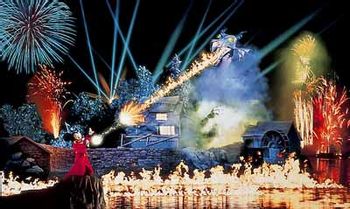 When you watch Disney, you see some timeless tales being told. Often these tales are ones of good versus evil, of a group of heroes going up against and defeating an evil villain. But what you don't know is, you're only seeing the tip of the iceberg. Disney has actually been chronicling a war that's been going on since the dawn of time, one that has spread across many dimensions and affected many lives. Below are explanations of the two sides, as well as a list of known members of each army. Read on to learn more.

There are no spoiler tags in these theories, and it covers everything Disney related. That means that soon enough there will be spoilers for the newest Disney or Pixar movies, the newest episodes of Disney produced shows, Kingdom Hearts, Epic Mickey, Star Wars and recent/current Marvel Cinematic Universe storylines. You have been warned.

If you want to contribute, feel free, just be sure the character is from a work that's Disney owned, not Disney distributed / airs on a Disney channel. (i.e. no Naruto Shippuden, Jimmy Two-Shoes, etc.) If you have doubts, ask yourself: could the work continue without Disney supporting it and without any change in copyright? Deleting entries is not friendly. Just because you didn't like a particular movie or show doesn't mean other people don't. Also, the Inner Circle and the High Council are now full, no other heroes or villains will be admitted. If you feel a character should be placed in one of these categories, take it to the discussion page first.

No meta stuff. That would likely lead to several joke entries like "Eisner's a Friend!" and Fan Dumb like that. The Kingdom Keepers is an exception, but only if it's explicitly stated in the books.

If you signed up for the Role Play, RSVP now! We start Monday! The forum post is here

Now with its own wiki. Seen here

. Please Help with that as well.

Compare and contrast Lost Tales of Fantasia, a fanfic that also combines all of Disney into a single conflict narrative, and has quite a few similar ideas, but is more of an actual story, and takes its style and tone in a different direction.

It is a given in the Disney universe that magic exists, and that magic is good, inherently - a la the Blue Fairy, the Wishing Star, the three Fairy Godmothers of Sleeping Beauty, etc. What the villains use in Disney films, then, is not the natural magic that makes sure that good is rewarded, but something far more sinister - that which Maleficient herself claims when she bellows, "And now you shall deal with ME, O Prince, and all the powers of HELL!!"

The powers of Hell are also called, "Friends On The Other Side" from The Princess and the Frog. They are the Big Bads of the Disney universe, working through many other villains. Their main goal is to collect souls to make like themselves, while their secondary goal is just to bring about destruction and pain.

There are a few rules about them:

Friends and The High Council

Tropes displayed by this theory:

This concept would make one hell of a TV Series!

This would make a great RP! Either on here or Livejournal, of course.( Silver Gryphon 8 says: There is now!

A fanfic I say, Make it a fanfic!

Hell, somebody email this to Disney! This has to happen!

A video game! Of course! Compared to this, Kingdom Hearts and Epic Mickey will look cheap in comparison!

It's stuff like this that justifies fan works. Congratulations.

Oh my goodness this is one of the greatest WMG I have ever seen, it leads itself so much to amazing stories and I just have to tell ALL MY FRIENDS.

The scope is fantastic.