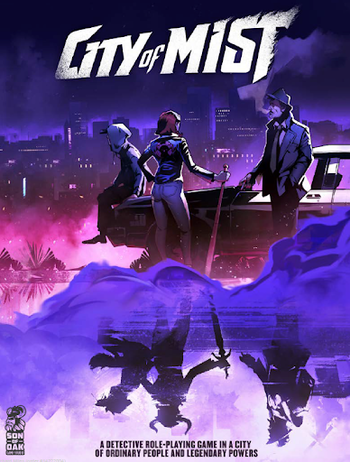 Ordinary People, Legendary Powers
City of Mist is a Tabletop RPG created by Son of Oak Game Studio and running on a variation of the Powered by the Apocalypse engine. It can basically be summarized as "Urban Fantasy meets Film Noir".
Advertisement:

The players play as "Rifts", people living in the titular City who just so happen to have legendary stories living inside of them—their Mythos, which grant them extraordinary powers. Those who don't have these powers are called "Sleepers", and they are prevented from seeing anything supernatural by the Mist.

Being a Rift sounds cool, but there are more than a few catches. Not only do you have to deal with all the problems of mundane life, you also have to contend with other Rifts, the enigmatic Avatars and their city-spanning operations, and the Gatekeepers, who are out to destroy you solely for existing. To top it all off, your Mythos has its own agenda, and to fulfill it better (and thus gain more power) you must completely sacrifice your old life.

The game is noteworthy for its unique take on character creation: instead of a few archetypes to choose from, players get four "theme cards" each, all with different classifications. They then write down exactly what these cards do in the form of tags: three Strength tags and one Weakness tag per card. This allows for much, much greater freedom with character creation than in most other Apocalypse Engine games.