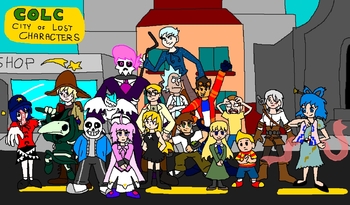 Welcome to the City, where a hack writer kidnaps people for plot ideas. For more information, please visit the library.note From left to right, top to bottom: Yoshika, Cole, Plague Knight, sans, Lewis, Fried, Caro, Arcade, Eve, Jack, Rick, Ben, Rex, Mary, Morty, Lucas, Ciri, and Seiga.
"A city, floating in the nothing between realities. A place that had all the amenities to call home, but was home to no one. A place that shifted when one was not looking, making everywhere in the city both close and far from everywhere else in the city. A city for those who had just been plucked from their own realities. A city of lost characters."
— Firock the game mod, beginning of signup thread

is a Massive Multiplayer Crossover Play-by-Post Game running on the TV Tropes forum, created by Firock Finion as a Spiritual Successor of The Massive Multi-Fandom RPG.

A mysterious, godlike entity, which spends its days writing stories about all the various universes, has come up with the perfect way to gain inspiration: mass kidnapping!

Thousands of characters from all over the multiverse are snatched up and find themselves inside a large city, floating in the void. Will they be friends, or will conflict tear them apart? How will they fare in this place, which keeps changing into unrecognizable forms based on their host's quirky whims? Are they ever going to get out, and what will it take to escape?

This roleplay contains the following tropes: