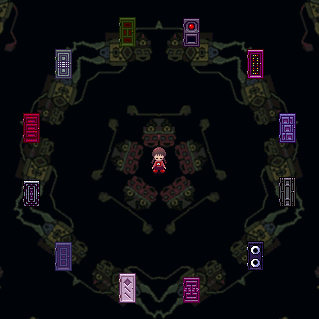 Madotsuki in the Nexus.
Advertisement:

In 2004, Japanese freeware developer Kikiyama created a game titled Yume Nikki (Japanese for "Dream Diary") in RPG Maker. The result was a surreal, abstract Art Game about lucid dreaming which gained a dedicated cult following in its heyday. Much of the appeal comes from the fact that everything in Yume Nikki, from the story to the imagery, is left up to the player to interpret.

You play as Madotsuki, a hikikomori shut-in who refuses to leave her apartment. There isn't much to do beyond sleeping, but that's where the game really kicks off. Madotsuki enters different worlds in her dreamscape and explores them, interacting with strange, alien-like creatures and collecting "Effects" which appear in the form of eggs. The goal is to collect all 24 effects and drop them off in the nexus, after which the ending will be unlocked. There isn't really a definitive plot to speak of, only vague implications of a background story, and very little (if any) instruction is given to the player.

The current version of Yume Nikki, 0.10, was released in October 2007 along with an English translation of the effects and menus. Download

, and have fun playing this in the dead of night!

For French Tropers, the game was fully translated in Molière's language and is available for download here

See also LSD: Dream Emulator, a game with a similar premise, only in 3D and with randomized environments. It is the Ur-Example of games like this.

In February 2013 yumenikki.net (no longer active) began offering merchandise. The most notable of such products was a manga, created by Hitoshi Tomizawa of Alien Nine fame. Here, Madotsuki is a girl who finds herself trapped in the dream world, and collects the effects while exploring in an attempt to find a way out. Soon, a sinister plot by eldritch forces is unveiled, and it becomes apparent that Madotsuki is far from their only victim.

Other works included a novel and an album of remixed songs. The manga and novel are not intended to have bearing on anybody's interpretations of the game, rather, they are merely their own creators' ideas.

The game got a Steam release

to the next Yume Nikki project. At the end of the countdown, a new 3D adventure game called YUMENIKKI -DREAM DIARY-

was announced and would be supervised by Kikiyama. It was released on both Steam and Playism on 23 February, 2018. Unlike the original, this one is a 3D exploration and puts more emphasis on puzzle-solving and light platforming. Here, Madotsuki must collect eggs hidden behind the worlds of the nexus. Playism later released a 2.0 version for the game, which adds new content to the game, on 24 May, 2018. A port for the Nintendo Switch was released on 21 February, 2019. Here's the teaser trailer

and the gameplay trailer.

Not related to Mirai Nikki.