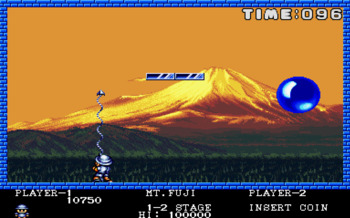 The Pang series (known as Buster Bros. in the U.S.) is a series of games by Mitchell where the goal is to pop bouncing balloons by using harpoons on a screen while avoiding being hit by them. It's more addictive than it sounds.
Advertisement:

The series produced four Arcade Games, all of which originally ran on various Capcom boards:

Ports of the first game were published for numerous computers by Ocean Software, and for the Game Boy and Turbo-Grafx CD by Hudson Soft (perhaps not coincidentally, Hudson had produced a rather similar game titled Cannon Ball in their early years). A NES version of the first game was cancelled, but the box art can be seen in this image

In 2010, Mitchell released Pang: Magical Michael exclusively for the Nintendo DS. In 2016, Pang Adventures was published on Steam, PlayStation 4 and Xbox One.

The Pang series contains examples of: