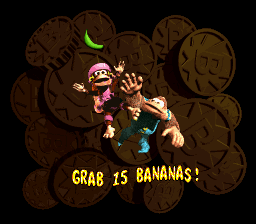 Just don't eat them green like that yet.
"Well there's a great message to sent to the kids, eat as many sweets as you can find, wherever you find them. Eat them off the dirty jungle floor and eat them off the branches. Just make sure to shovel as many as you can into your face or you'll earn a pathetically low score and be a failure in the eyes of your peers."
— Ray Hardgrit, Super Adventures in Gaming, review of

Sometimes the food in video games doesn't give you health or special powers, nor do you need it to keep from going hungry. Sometimes those shiny-looking fruits or appetizing pastries are just there for Scoring Points, or otherwise as arbitrary objects to collect.

This is primarily associated with Arcade Games of the 1980s, where the food items typically took the form of fruit. "Fruits" was even used as a generic term for food that may not technically be fruit.

The game may not even make clear whether you're actually eating the food as you go. The question is not necessarily resolved when objects such as gemstones provide the same kind of bonus as food; some games preposterously imply that you can eat those things as well.

Often overlaps with Game Gourmet, when there are well over a few different food items you can get your hands on. Not to be confused with Edible Treasure, which is when buried treasure turns out to be food.

References in other media: