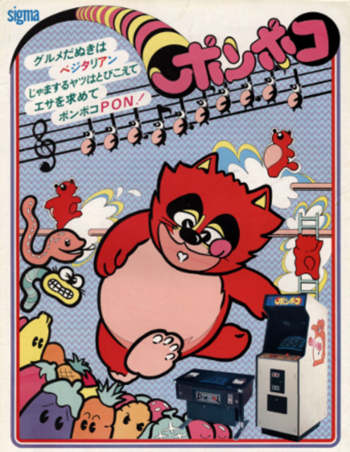 RUN RUN PONPOKO
TO EAT THE FRUITS
JUMP BOUND AROUND
WITH YOUR BIG BELLY OUT
— Attract Mode song
Advertisement:

Ponpoko is a 1982 Arcade Platform Game. Though originally produced in Japan by Sigma Enterprises, it became most popular in South Korea, where it is known as Neoguri (너구리).

The player controls a tanuki named Ponpoko, who goes around single-screen levels collecting fruits, climbing ladders, avoiding enemies, and jumping over spikes and gaps in the platforms.

Not to be confused with Pom Poko.