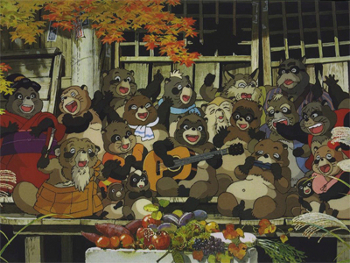 Enjoy this rare view of the tanuki with their magic scrotums covered. It will not last.

Heisei Tanuki Gassen Ponpoko (Heisian Tanuki War Ponpoko, 1994) is Studio Ghibli's 8th film. It is the story of a rag-tag group of magical animals engaged in a desperate battle to prevent the destruction of their forest.

Directed by Isao Takahata, Pom Poko deftly fulfills Ghibli's dual missions of advocating for the environment and preserving traditional Japanese culture by presenting a cautionary environmental story and a raucous exploration of Japanese folklore all wrapped up a bittersweet tale of the costs of urban sprawl told from perspective of the displaced animals.

The Tanuki, known as the "raccoon dog" in English (which is not related to the North American Raccoon, as much as it might resemble one), occupies a very important place in Japanese traditional and popular culture. Pom Poko takes full advantage of this by working in just about every Tanuki reference available from fairy tales, folklore and even nursery rhymes. Needless to say, most of these references are lost on non-Japanese audience. Unfortunately, as Takahata's partner Hayao Miyazaki has been known to lament, nowadays many of these things are lost on the increasingly urbanized Japanese as well.

Well noted for the scene where defiant tanuki use one of their most prominent fairy tale features (their extraordinarily large testicles) as clubs to attack the police. And it shouldn't surprise anyone that the art is incredible, seeing as it's a Studio Ghibli film.

'Ponpoko' is a reference to the sound the tanuki of legend were supposed to make using their bellies as drums.