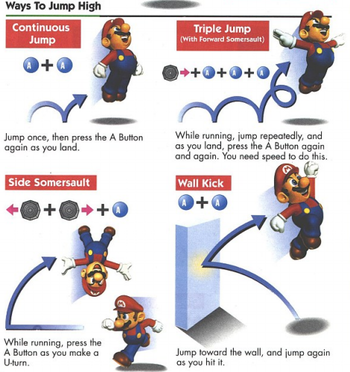 "Jumping is much, much more useful in video games than in real life. In video games it's often instrumental to saving the world from some sort of grotesque, otherworldly force, not to mention getting 100%. In real life, it mostly helps keep your socks dry."
— Lore Sjöberg, The Book of Ratings
Advertisement:

Most human beings can't jump high or far enough for it to be a particularly useful skill in navigating platforms above abysses.

But the Platform Game wouldn't exist if we didn't relax this a bit, so the physics of jumping in video games is a bit different from that of the real world. Namely:

(If any of that makes you feel inadequate, take solace in the one thing a fit human can jump over that no videogame character has ever managed — the Insurmountable Waist-High Fence.)

Note that any or all of these points can be changed; these represent the baseline level for the Super Mario Bros.-descended platformer.

Cars and horses have their own equivalents. See also Vent Physics, Art Major Physics. Cinematic Platform Games are a notable exception, since their main focus is realism.