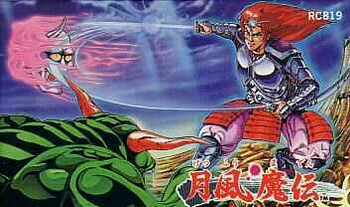 Getsu Fuma Den (translated as "The Legend of Fuma Getsu") is a 1987 Action RPG by Konami originally released for Famicom.
Advertisement:

In the first year of the Demon Age (14672), a horrible demon named Ryukotsuki was revived by his minions in hell. To protect the peace of the overworld, the two eldest Fuma brothers fought Ryukotsuki. Both were unable to defeat him and were killed, losing their legendary Pulse Blades. To avenge their deaths, the last of the Fuma brothers vowed to slay Ryukotsuki and retrieve the swords.

While never released outside of Japan, there are English Fan Translations. Getsu Fuma and Ryukotsuki, however, have occasionally appeared (or at least having influences) in other Konami media, such as in Yu-Gi-Oh!, Neo Contra, Hard Corps: Uprising, Otomedius (although they both are represented by girls in that game), and Castlevania: Harmony of Despair.

In an unexpected move from Konami, a Revival sequel titled GetsuFumaDen: Undying Moon was released worldwide. It first launched on Early Access via Steam on May 13, 2021, released for Nintendo Switch on February 9, 2022, and then left Steam Early Access on February 16, 2022.