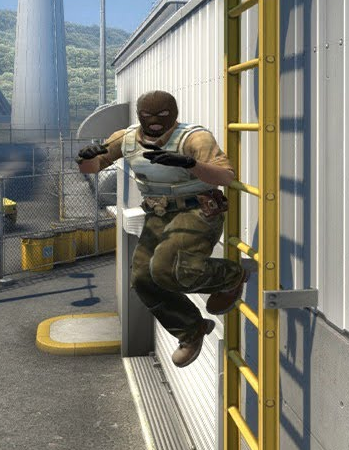 "Can he cast spells hanging by his feet from the ladder?"
— Gabe, Acquisitions Incorporated (the D&D podcast

Much like Jump Physics, characters in video games don't usually tend to interact with ladders the way people in real life do. These things range from climbing ladders apparently without needing to use arms (i.e. keeping them free to fire large weapons, like the BFG), to completely breaking one's fall simply by grabbing them. Also, in many cases you'll be able to rotate your view a full 360 degrees while attached to the ladder, with no physical restraints. Sometimes, it's even possible to 'jump' up the ladder, or climb up backwards.

This works against you as well, as ladders are among the most prevalent causes of death in first-person shooter games. The primary reason for this is that getting on and off a ladder in many FPSs is automatic: if you're touching the ladder and walking in the proper direction, you'll get on or off and climb. The problem with this being that it's very easy to slide off the sides or walk backwards off the front to your doom. It also makes getting onto the top of a ladder something of a crapshoot, since it seems no two developers ever come up with the same solution; you might have to walk as if stepping off whereupon you'll automatically turn around and grab on as you start falling, step backwards off the ledge and use air control to grab the ladder on the way down, hit the use key...even when you're on it, climbing is a risky business and working out what 'climb down' is can result in death. For example, pressing 'back' (because forward is up the ladder, surely!) may make you leap backwards off the ladder to your doom, because the devs thought it made more sense to use crouch and jump as the climbing keys.

Third-person games tend to be more realistic with ladders than first-person, because when the player can see his character the developers have to at least try to make it look good.

Another related mechanic is when a ladder is only climbable from one side, even if it is accessible from both sides. This is done to avoid frustration (you don't want to climb a long ladder for ten seconds only to find out at the top that you climbed the wrong side and can't get up on the platform), though it can be annoying if you want to quickly latch onto a ladder to escape something on the ground. Rarely, if ever, is your character given the ability to simply move from one side of the ladder to the other.