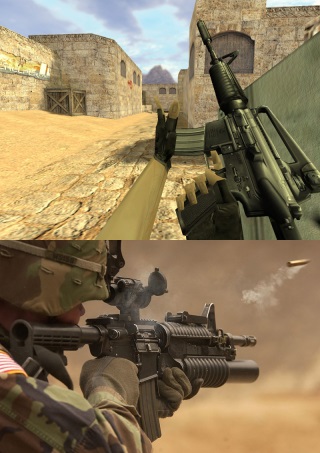 Top - This trope in full effect. Bottom - How guns are really designed
A trope starting to crop up in videogames, in which a firearm is clearly not designed to be used in the hand it's being held in; since almost all FPS protagonists are right handed, this has them holding left-handed guns. Or when wielding Guns Akimbo, a left-handed gun in the right hand and right-handed gun in the left.
Advertisement:

In a real right handed gun, the ejection port almost always ejects spent casings to the right, away from the shooter. There's a good reason for this; spent casings are typically extremely hot and can be ejected with significant force; although many conventional service weapons like the AR-15/M16 family are designed for ambidextrous operation without need of conversion, using some weapons in the "wrong" hand is potentially dangerous. This is especially true of bullpup weapons. The Austrian Steyr AUG and French FAMAS require conversion for left-hand operation, while the British Army simply trains everyone to use the SA80/L85 and its derivatives right-handed, period. The FN F2000 uses a forward-ejection system, while the P90 SMG/PDW ejects downward.

Sometimes the gun won't simply be reversed; the controls present on the left (to allow the user to operate them with their thumb; safeties, fire selectors, etc) will still be present, as well as all the stuff from the right.

Several game companies have spoken out as to why this is reversed in videogames; mainly, it's for the Gun Porn effect. The left side of a right-handed gun is typically fairly flat and less visually interesting than the various moving parts, levers and controls found on the right; in addition, there's an opinion that ejecting brass across the screen rather than off to the side is more "dynamic." The only guns that tend to escape this treatment are belt-fed machine guns, since the belt is interesting to look at and makes for a nicely in-depth reload that would be harder to see with the weapon reversed (machine guns that feed from the right, as such, tend to be reversed even in games where this trope is otherwise not used), and revolvers, since a typical revolver's cylinder already swings out to the left for reloading and they don't have an ejection port for spent brass to fly out of. Any game using this trope is also likely to have a lot of superfluous yanking of the charging handle during reloads, because, well, it's right there after all.

Another explanation for this trope that has been offered by gamers and game makers is that, in cases where a gun in a game is based on a gun in real life but that the developer has not officially licensed, mirroring the gun gives enough distance from its real world counterpart to be able to dissuade possible legal action for copyright infringement.