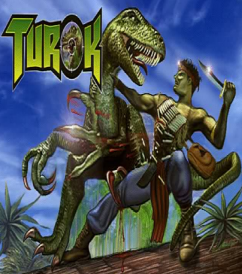 Turok is a video game franchise based on the Turok comic book series published by Valiant Comics.

The first Turok video game, titled Turok: Dinosaur Hunter, was released in 1997 for the Nintendo 64 console. It followed Tal'Set Tan'Celle'Nyo, the eldest male in his family chosen to become Turok: The protector of the boundary between this dimension and the others, a series of parallel universes held together by "The Lost Lands," a world where "Time Has No Meaning." In other words, a place where things like robots, cyborgs and aliens from the distant future, Demons from the darkest pits of Hell, and Dinosaurs from primeval jungles ran rampant, and where various people from different dimensions were at war for its control. The job of the current Turok was to keep balance in this world and close the portals to the other dimensions that were bound to The Lost Lands. (This was also a good excuse to give a Native American warrior things like Nuclear Fission Cannons and Radioactive Death Rays.)

Turok was well received by gamers and critics alike, and paved the way for the even more popular sequel: Turok 2: Seeds of Evil (1998), which was lauded for its excellent AI, graphics and long, sprawling levels. It followed the life of Joshua Fireseed, a modern-day eighteen-year-old young man chosen to become the next Turok, as he slaughtered his way through hordes of enemies to stop the evil Primagen from destroying his universe. A PC port and a side-scrolling Game Boy Color version were released in the wake of the game's success, but both were poorly received.

The following title, Turok: Rage Wars (1999), was a pure multiplayer game along the lines of Quake III: Arena or Unreal Tournament, which was situated outside the main chronology. Despite this (and a so-so reception from reviewers) Rage Wars was well received by fans.

The third canonical entry to the franchise was Turok 3: Shadow of Oblivion (2000), which took a more story oriented path than the previous games, and more-or-less picked up where Seeds of Evil left off. The Hero of the previous game dies, leaving his two remaining family members — younger brother Joseph and older sister Danielle — to carry on the family tradition of blowing up dinosaurs with big guns... And to also stop the abomination known as Oblivion from devouring all life in the universe. The game was sadly mired by programming errors and annoying bugs, as well as poor voice acting. A common fan criticism is that it didn't have the feel of a Turok game.

A Continuity Reboot by Propaganda Games and Disney's Touchstone Games, simply titled Turok, was released in 2008 for PlayStation 3, PC and Xbox 360, with the titular hero as a Space Marine. While not a terrible game, it was dismissed as simply a generically-average shooter that had the bad fortune to be released at a point when several unique and very good shooters were crowding the market, and received predictably poor reviews and fan reception. While a sequel was planned, it was cancelled, deep-sixing Touchstone Games and Disney's move to make a franchise out of it. (Ironically, Disney would purchase the company who took the Acclaim name and finish off the brand name for good in 2010, while DreamWorks Animation obtained the rights to the Turok franchise when they purchased copyright holder Classic Media in 2012.)

In 2015, a PC-exclusive Updated Re-release of Turok: Dinosaur Hunter was released on GOG.com and Steam by Nightdive Studios, who were behind the updated rereleases of System Shock and Strife, boasting features such as redesigned levels, increased draw distance and frame rate, widescreen support, and new graphical effects. A similar remastering of Turok 2: Seeds of Evil followed in March 2017. Both remasters were eventually released for Xbox One and Nintendo Switch, as well as PlayStation 4 later on.

In 2019, 11 years after the release of the 2008 reboot, Pillow Pig Games and Universal Studios Interactive announced Turok: Escape from Lost Valley, a 2D isometric action game with a cutesy, super deformed art style. It released on July 25, 2019 on Steam.