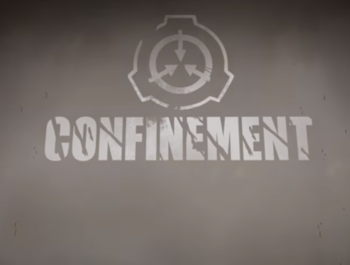 I will shiver the whole night through...

Ferdinand the Cannibal: I say! You're not an average chap like the rest of them, are you?
Connor: Not... technically, no...
Ferdinand the Cannibal: You're an abnormality. An SCP, like us! You belong here with us!
Connor: No, no no no! I do not belong here with you! I am not a human atom bomb, I'm not a rapidly evolving virus, and I'm not a Shakespearean cannibal!
— Confinement Ep1: The Cannibal

"Confinement" is a Black Comedy animated series centered around the SCP Foundation. It is created and animated by Lord Bung

The series focuses on one of those delightfully expendable folks known as a D-Class personnel, this one being a young man named Connor. But there's one twist: Connor can't die.

Naturally, the Foundation loves using him for experiments as a result, and the series focuses on the wacky, painful and bloody encounters he has to deal with as a result of this. Needless to say, extremely dark Hilarity Ensues!

Not to be confused with the fanfic of the same name.