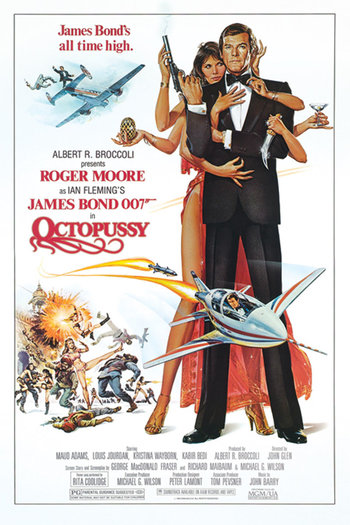 We're an all time high, we'll change all that's gone before...
"Mr Bond is indeed of a very rare breed… soon to be made extinct."
— Kamal Khan
Advertisement:

The one where Bond disguises himself as a clown to disarm a bomb hidden in a circus cannon, thus preventing The Cold War from catching ablaze. It Makes Sense in Context.

Octopussy is the thirteenth James Bond film in the Eon Productions series, the second to be directed by John Glen and the sixth to star Roger Moore, coming out on June 6, 1983. The Title Theme Tune, "All Time High", was performed by Rita Coolidge.

After a replica Fabergé egg is found on an assassinated agent, James Bond is sent to India to infiltrate a gang led by Octopussy (Maud Adams). 007 soon discovers a connection between the priceless Fabergé egg, shady Afghan prince Kamal Khan (Louis Jourdan), an elaborate smuggling operation and a meeting with a mad Soviet general, Orlov (Steven Berkoff), who plans on detonating a nuclear device at Octopussy's circus as part of his plan to force an American withdrawal from their bases in Western Europe, allowing the Soviets to dominate the continent (or, more likely, causing World War III).

The non-Eon Bond film Never Say Never Again, with Sean Connery, came out the same year, though there hasn't been a Bond film from any company other than Eon since.

Despite the title, it has surprisingly little to do with a popular subject of Japanese pornography.

Preceded by For Your Eyes Only and followed by A View to a Kill.