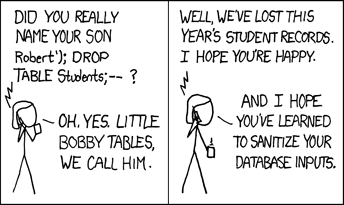 Two characters are being introduced to each other for the first time. However the first introductee has a really wacky name; for example, he is a businessman called "Mr. Moneygrabs". The other character feels compelled to laugh, thinking that it is a joke. However, it is not. It is, as it is pointed out, a long running and respectable family name.

(This often happens in Real Life to people who happen to share a name with a famous person. Or whose name is quite apropos to their profession.)

May overlap with It Is Pronounced "Tro-PAY". Might have an Embarrassing First Name as well. Frequently leads into Never Heard That One Before. See also Who's on First?. Compare Mistaken for an Imposter. Compare Who Names Their Kid "Dude"?, where the name isn't mistaken for fake, but is considered weird. Often overlaps with Punny Name.

Bart makes a prank call to Moe's, asking for Hugh Jass. He is taken aback when Moe passes the phone to Mr. Jass.

Bart makes a prank call to Moe's, asking for Hugh Jass. He is taken aback when Moe passes the phone to Mr. Jass.