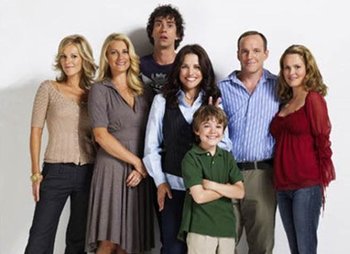 The New Adventures of Old Christine is a sitcom created by former Will & Grace writer Kari Lizer, starring Julia Louis-Dreyfus. Airing for five seasons (2006–10) on CBS, it allowed Louis-Dreyfus to defeat the dreaded "Seinfeld curse."

The show revolves around divorced mother and gym owner Christine Campbell (Louis-Dreyfus), a mess in many respects, who has nonetheless maintained friendly relations with her ex-husband Richard (Clark Gregg). One of her many neuroses is triggered by his dating a younger woman who's also named Christine (Emily Rutherfurd), thereby making her "Old Christine" to the other's "New Christine". Also in her orbit is her brother/housemate Matthew (Hamish Linklater), son Richie (Trevor Gagnon), and sassy black business partner Barb (Wanda Sykes).