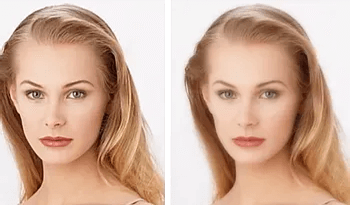 Scientists have proven that Captain Kirk shows up to 80% more sexual arousal when exposed to the right-hand picture.
"Do you remember when Captain Kirk saw a beautiful woman, the screen would go all misty? I thought his eyes were steaming up because he was so excited. Every time I talked to a girl in my class I tried to make my eyes steam up. They called me Scary Jeff."
— Jeff, Coupling, "The Girl with Two Breasts"
Advertisement:

An especially common creature in films from The Golden Age of Hollywood, the Gaussian Girl is distinguishable by her supernatural blurriness and by the soft, romantic music accompanying her.

When filmed, the Gaussian Girl is shot through a soft-focus filter, a piece of translucent plastic (or very sheer silk, in the days of classic film), or a quick smear of Vaseline, depending on the director's and/or cinematographer's preference. This surrounds her with a softly glowing aura, and smooths out any unappealing pores or lines on her face. The result makes her look nothing short of ethereal. If you can't tell a soft-focus shot, look at all of the light sources around her; if they have a starry-glare or halo look, it's soft focus.

Depending on the show, she might only display this quality when first encountered to show that she's the Girl of the Week, or she might be blurry all the time. She'll never be blurry when a man is in the shot with her, unless they're kissing. Closeups tend to have the most blur.

Named for the Gaussian Blur effect in photo editing software. Also, she may arouse a viewer's desire to degauss his screen. That is, until he remembers it's LCD...

You can create your own Gaussian Girl by duplicating her base layer, giving the new top layer a strong Gaussian Blur, and then setting it to about 50% opacity. If you are a straight guy or a Lesbian and need glasses, you can achieve a similar effect by taking them off before looking at women. (Straight women and gay men also sometimes enjoy this effect when looking at men and there's definitely such a thing as a Gaussian Guy.) If you don't, try having a lot of alcohol first. This latter technique is called the Beer Goggles effect. (Thus the phrase, "She's a 2 at 10 but a 10 at 2".)

This may come from a practice in the early days of filmmaking, when a piece of silk or gauze, a sheer stocking, or a smear of Vaseline was placed over the lens of the camera to blur the image of the actresses and hide imperfections on the face. Popularized by the fabulous Carole Lombard, who spent her time in the hospital after suffering a serious facial injury devising ways in which she could hide her eventual scar; if Lombard didn't invent the Gaussian blur, she knew the person who did. Some have suggested that with the inception of High Definition film and television, which naturally shows more imperfections, the soft focus trick might make a return to compensate.

There is some physiological justification for the "soft focus=appealing" relationship. Desire is one of the things that makes a person's pupils dilate. A side-effect of this dilation is to slightly shift the eye's focus into the distance, making anything closer just that little bit more blurry. With experience, the observer's capacity for visual perception learns to correlate cause and effect, and the effect becomes supporting evidence for the cause.

A more limited, so to speak, application of the technique was used during the days of The Hays Code to make sure that women in low-cut dresses weren't displaying their cleavage in too much detail, thus corrupting innocent youth. A limited portion of gauze or stocking, held in a frame, could be used to blur the "offending" anatomy and render it suitable for viewers.

Has nothing to do with Gauss guns. Or electromagnetism in general. (Well, not much