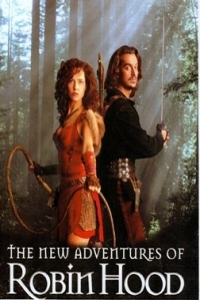 Anna Galvin and Matthew Porretta as Marian and Robin
The New Adventures of Robin Hood is a 1997-1998 live-action TV series, produced by Warner Bros. International Television and aired on TNT. It was filmed in Vilnius, Lithuania. The tone of the series resembles its contemporaries Hercules: The Legendary Journeys and Xena: Warrior Princess.