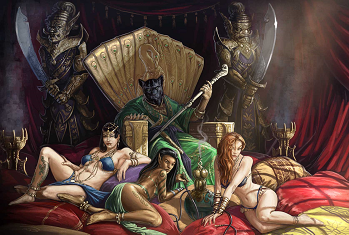 "It's good to be the king!"
The royal harem is a part of certain aristocratic courts and can serve as both a setting and a plot driver for various stories. The combination of sex, forbidden-ness, and exoticism that fictional harems often represent has led to them showing up in numerous stories over the years.
Advertisement:

The real-life harem was simply the designated private quarters for the female relatives of a Muslim household: nominally the wife, concubines, unmarried daughters, sometimes female servants, and occasionally unmarried sisters, cousins, nieces, etc. Men other than the household's patriarch were not allowed in the harem, so when white European explorers started visiting Middle Eastern countries and learning of these forbidden places where only women could go (and the royal harems were sometimes guarded by eunuchs who were allowed inside)—much like with women's prisons, they imagined there had to be a whole lot of sex going on. By the advent of the Industrial Revolution in many Muslim-majority countries, the idea of a female-only living quarters still existed (As in many Arab countries); but was only just that—the premise of royal quarters for servants and slaves ceased to exist by the mid-20th century.

Sometimes, harems exist in fiction simply because authors want to add some sex to the story, and what better way to do that than include a whole place dedicated to sexual gratification? Harems in such stories will generally be full of beautiful young women with insatiable sexual appetites, and will probably serve little plot function but to get the hero laid. Many such harems take place in settings with Eternal Sexual Freedom.

In other works, however, the harem may be explored in a bit more detail, such as by paying attention to the situation and wishes of the people who live in it. In some works, these people will be abused captives who all hate being there, and the plot may well involve escape or rescue. Other works will have them be more content — they may be reconciled to their lack of freedom, or may not be captive at all, instead having something more akin to a special case of Unproblematic Prostitution. What complaints they have will mostly be of the Gilded Cage variety (with sheer boredom not uncommon). Sometimes, life in the harem will be positively luxurious and may be highly sought after.

Harems are off-limits to most, which often puts them into Forbidden Fruit territory (and leads to quite a lot of Disguised in Drag plots). Many harems will be guarded and/or served by eunuchs (who tend to be bad news), a traditional means of lowering the chances of anyone except the harem owner having sex there. There may be some person who has particular authority over the harem (whether a eunuch, a chief wife/concubine, or a relative of the owner). If the court is deadly and decadent, expect a lot of politics in the harem, with its members competing with each other for power and preference. As in many real harems, getting to be the ruler's favourite (and maybe wife) could be worth a lot, especially if you become mother to a much-desired heir to the throne. In many works, rulers who are too thoroughly captured by their harem will end up ruining the realm.

Royal harems are often thought of in connection with "exotic Oriental lands", so they often coincide with tropes relating to Middle Eastern, South Asian, and East Asian cultural imagery (or maybe all of them at once, if the writers aren't fussy). The standard fictional harem girl looks a lot like a standard fictional Belly Dancer, and the two might not be much distinguished. They are often Bedlah Babes. Depending on context, the harem may be known by various other names—seraglio, serail, hougong, ōoku, and more. In more modern settings, the harem may belong to a dictator or an elected leader, rather than a monarch. Harems in fiction do not necessarily bear much resemblance to forms the real thing tended to take—see the Real Life section.

Contrast Harem Genre and the various tropes related to it (Harem Seeker, Unwanted Harem, etc.)—those are tropes about character relationships and gender ratios, whereas this is a setting and scenario trope. The two may sometimes coincide, but less often than the names might imply—most works in the Harem Genre don't involve literal harems in the traditional sense. Contrast also Paid Harem, where the harem in question is a person-specific, as-long-as-the-money-lasts arrangement rather than an established aristocratic institution. If said harem is capable of fighting as a unit, they easily qualify as Battle Harem. Vampires have their own trope.