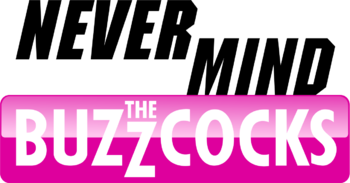 British Panel Game (1996- based around pop music, named after the Pop Punk band Buzzcocks and the album Never Mind the Bollocks, Here's the Sex Pistols. The most recent lineup consists of host Rhod Gilbert, with Phill Jupitus and Noel Fielding as captains of the two teams of three. Previous team captains were Sean Hughes (Series 1-10) and Bill Bailey (Series 11-21), each time taking the opposing side to Phill Jupitus. The two other members of each team are whatever musicians, comedians or other recognisable faces the producers can secure at the time — there has been Lampshade Hanging about the poor quality of the guests on numerous occasions... which some guests take more good-naturedly than others.
Advertisement:

The show debuted in 1996. Mark Lamarr was the original host, and after his departure there were a series of temporary hosts, including Ricky Wilson of the Kaiser Chiefs and Jeremy Clarkson from Top Gear before Simon Amstell took over until 2009. The show returned to using guest hosts until 2013. In 2014, Rhod Gilbert took over as the regular host, and exchanged the show's often vitriolic atmosphere for a format in which both he and his guests have as much fun as possible. However, this would be the final year of the show in its original format as the BBC chose to axe it in 2015. In January 2021, it was announced Sky had commissioned a revival which is currently in development which began airing in June of the same year with Greg Davies as the new host. Phill Jupitus was replaced with Daisy May Cooper and Noel Fielding was kept on from the previous lineup. It has yet to be announced if the show will be revived for another season after 2021.

The format was exported to VH-1 for American viewers.