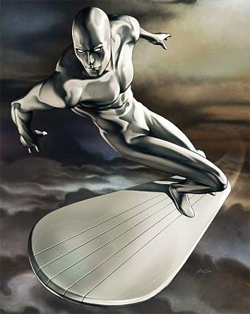 This would make a good cover for a Metal album!
"He's air surfing! I can't believe I never thought of that!"
— Aang, Avatar: The Last Airbender, "The Avatar and the Firelord"
Advertisement:

A form of transportation and example of Not Quite Flight in which the flyer stands on top of an object with relative propulsion and control surfaces. While the rider is usually the one in control, all the work is done by whatever he's standing on.

Despite the trope name, the flying vehicle in question doesn't necessarily have to be surfboard-shaped.

Owes its existence to The Sky Is an Ocean and, of course, the Rule of Cool.

The difference between a Hover Board and Sky Surfing is that a Hover Board (whatever its shape) is limited in how high above the ground it can go.

is real, in real life, it's just fancy tricks in the air while falling rather than transportation of any kind.

Super-Trope to Magic Carpet, Flying Broomstick, Flying on a Cloud and Ride the Rainbow. If the rider isn't the one in control of the object he's on top of such as a plane or similar, it's Outside Ride.