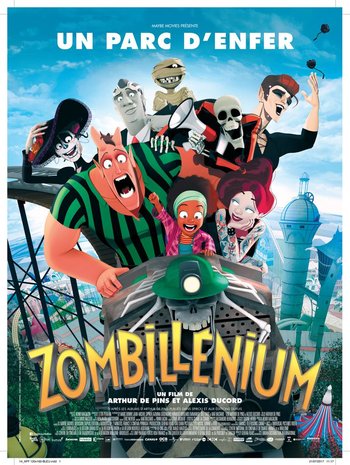 Zombillenium (French: Zombillénium) is a 2017 French-Belgian animated film directed by Arthur de Pins and Alexis Ducord, based on the comic series of the same name. It was shown in the Special Screening section at the 2017 Cannes Film Festival.

In Zombillenium, the Halloween theme park, the monsters are unhappy. Not only are the zombies, vampires, werewolves, and other demons real monsters whose souls belong to the devil forever, they are also tired by their jobs, tired of entertaining consumerist, voyeuristic, and egotistical human beings. In short, they are fed up with office life in general, particularly when it is destined to last for eternity. Then Hector, a human being, arrives. This Standards Compliance Officer is determined to close down the park. Francis, the vampire manager of the park has no other option: he must bite in order to keep their secret. Transformed into a strange monster, separated from his daughter Lucie, and stuck in the park, Hector has a dark outlook on life. What if he finally became the new leading attraction of Zombillenium?