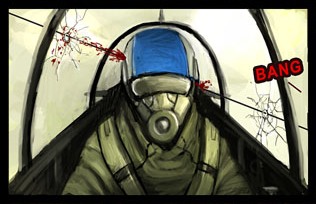 No matter how badass your Cool Tank, Cool Plane, or Humongous Mecha may be, its crew is still often made up of flesh-and-blood human beings who, once you get past the vehicle's armor plating, are just as vulnerable to damage as any other. Enemies who have Armor Piercing weaponry may come to realize that they can stop your rampaging murder machines with just a few well-placed rounds to the cockpit. In the same manner that a well-placed shot to the head can instantly kill a human being, an attack that deliberately targets and kills the pilot can stop a vehicle without having to exert the time, energy, and resources to reduce it to scrap metal.

This is common in newer First-Person Shooter games, where killing the pilot or other crew can take the vehicle or some of its weapons out of action until those stations can be manned again. Sometimes, especially if the vehicle itself has a Crew of One, it can also be used so that the opposing force can hijack the vehicle and turn it against its owners.

Car Chase Shoot Out and Disposable Pilot often overlap with this. Contrast In-Vehicle Invulnerability. Can lead to a Dead Foot Leadfoot.