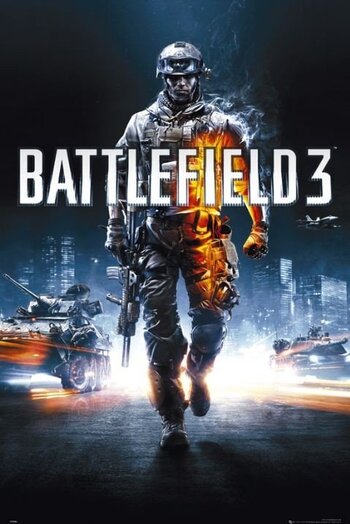 Let's go back to Karkand.
"You can only die once. Make sure it is worth it."
— Dmitri 'Dima' Mayakovsky
Advertisement:

Be advised: You are now entering the Battlefield 3 page.

It is a First-Person Shooter with a heavy emphasis on multiplayer action and the use of all types of combat vehicles including tanks, jets and helicopters, as well as improving on the infantry experience of its predecessors. It has deep persistence using the Battlelog internet server browser and game manager. Despite the emphasis being on the multiplayer, it also includes a 3 to 5 hours long single-player storyline campaign, set in 2014. It involves a new faction taking power in Iran and weaves an international story through a series of flashbacks based on the recollections of Staff Sergeant Henry "Black" Blackburn, a US Marine. He is trying to stop an attack on New York City, but locations involve Iraq, Iran and Paris, among others. It also includes a Co-Op game mode.

It was released on PC, Xbox 360 and PlayStation 3, although as the console hardware had become long in the tooth, with PC being the lead platform. Its multiplayer has the ability to have 64 players in a server, while the console versions only supports 24.

Another sequel, Battlefield 4, was released on all major consoles and PC in October 2013.

Be advised: Spotted a number of tropes in your AO.