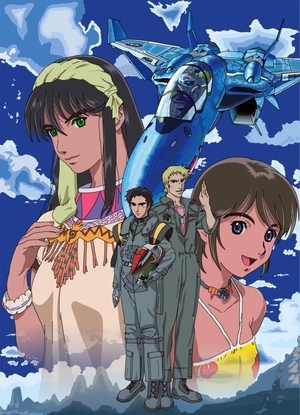 Macross Zero is a five-episode OVA released from 2002-2004, set as a Prequel to the popular Macross series. The story takes place in the year 2008, nine years after an alien ship crash-landed in the south Pacific, in the final days of the Unification Wars mentioned earlier in the series. It involves Shin Kudou, a Japanese-American UN soldier who crash lands on a small island after a fateful encounter with one of the first of the series' transforming Humongous Mecha.

On the island, he meets Sara Nome, a priestess of the island's religion, and Mao Nome, Sara's Genki Girl little sister. Thanks to Shin, the island is drawn into the war for the unification of Earth, as well as the fight to posses the various pieces of a strange alien corpse called a "Birdman"/"Bird Human" which figures into the island's religion and may cause untold destruction if allowed to be put back together again.

Like the Macross Plus OVA before it, Macross Zero eschews the usual Space Opera setting for a more personal story. Like the rest of the Macross series, it involves Transforming Mecha, a Love Triangle and the Power of Music saving the world. Unlike the rest of the series, the usual J-pop/J-rock has been replaced with a much earthier soundtrack, reflecting the setting in the South Pacific.