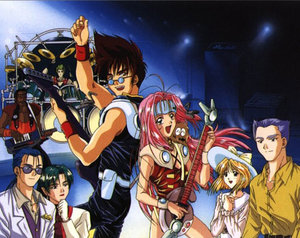 "Listen to my sooooooong!"
Advertisement:

The second full series of the Macross franchise and sequel to Super Dimension Fortress Macross, Macross 7 originally aired from 1994-1995. It's about a rock and roll band living on a flying city in space who fight evil space vampires using The Power of Rock and Transforming Mecha that are controlled with guitars.

The show prominently features an outstanding soundtrack from a real J-Rock band ("Hummingbird") hired to double as the fictional band "Fire Bomber." Very popular in Japan, though controversial among hard core Humongous Mecha fans. Unlikely to appear any time soon in North America due to the tangled legal snarl surrounding the Macross franchise and the need to license all of the accompanying songs.

Besides the 49-episode TV series, there's also a short film (The Galaxy's Calling Me!), two OVA series (Encore and Dynamite 7, with the latter taking place one year after the end of the TV series), and a compilation film (Macross FB7: Listen to My Song!, which is also something of a Macross Frontier crossover).

Compare and contrast Mobile Fighter G Gundam in terms of a franchise sequel that differs greatly from the source material.