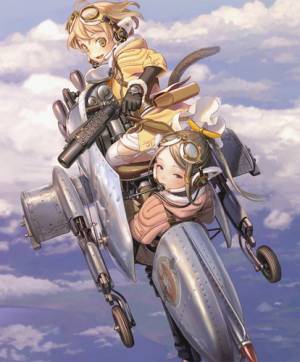 Taking place two years after the original, Last Exile: Fam, the Silver Wing focuses on Fam and Giselle, "vespa" pilots who work as Sky Pirates capturing battleships. But things change when they rescue Princess Liliana and Millia of the Kingdom of Turan, which is being invaded by the powerful Ades Federation led by Liliana's old friend, Premier Luscinia.

Last Exile: Fam, the Silver Wing is historically significant as the first ever animated TV series in history to be broadcast specifically to take advantage of home-3D-television technology (invented by SONY) on network TV. The show was simulcast on the same day in both Japan and Asia on Animax Asia.

Start lining up for your 3D glasses, people...

Not to be confused with the Silverwing book series or its animated adaption.

May the Wind be strong beneath your wings. And may good tailwinds bless your flight.