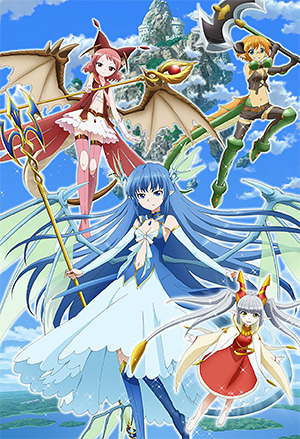 Our Dragons Are Badass Adorable.
Advertisement:

The story is set in Aquafall, a fantasy world abound with water and greenery, and populated by dragons and fairies. Meteorites suddenly bring forth evil creatures that threaten all living things on the planet. The fairy Syrup assembles the Aquafall Defense Force, with three girls of the dragon clans as recruits. The story follows Syrup and the dragon girls Leviatan, Bahamut, and Jörmungandr as they work together to battle enemies and grow up.

It is an anime based on the mobile game released the same month directed by Strike Witches' assistant director, Kenichi Yatani that began airing on April 6th, 2013 as a part of the Spring 2013 Anime season.