Manga / Laughing Under the Clouds 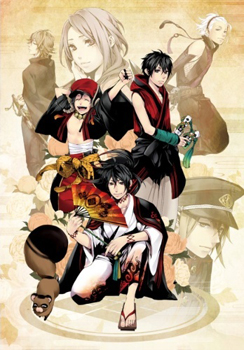 "Greed. Avarice. Pride. Devouring all living things. Scorching the earth, defiling the seas. The serpent of destruction. Pay heed, for Orochi is the enemy of mankind. Seal immediately after hunting down..."
Advertisement:

Laughing Under the Clouds (Donten ni Warau) is a manga created by Kemuri Karakara which ran in Monthly Comic Avarus from 2011 to 2014. In October 2014, it received a 12-Episode Anime adaptation by Dogakobo, that was quickly picked up by Funimation.

It's the eleventh year of the Meiji Era (1878), and Japan is on the brink of the modern age, a potpourri of Western influences and traditional leanings. A prohibition against carrying swords has been declared by the government and the samurai have disappeared, resulting in skyrocketing crime rates and overflowing prisons.

The solution? Gokumonjo, a giant island stronghold in the middle of Lake Biwa in Shiga Prefecture, which is also known for its perpetually cloudy skies. You see, there's a tale that says it's been like that for the past 300 years, and that such weather is an omen of great disaster...

Anyway, the Kumo family of Cloud Shrine has been tasked with ferrying convicted criminals across the lake to their final destination, a duty that currently lies in the hands of three brothers; Tenka, Soramaru and Chutaro, aided by their resident freeloader, Kinjo Shirasu.

With this as its backdrop, the main story revolves around the search for the mysterious vessel of a legendary monster, the so-called Orochi, said to reincarnate every 300 years in the lands around Lake Biwa and cause unimaginable destruction. Various factions seek the vessel, either to destroy it, protect it, or use it for their own gain, and the Kumo brothers are prime suspects due to their family's prolonged history of enmity towards the Orochi.

There are two prequels, of sorts, set 600 and 300 years before Donten ni Warau respectively, as well as an additional volume: