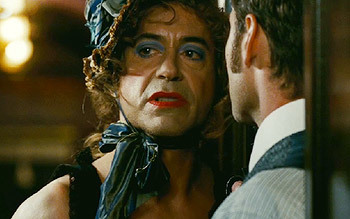 I agree, it's not my best disguise, but I had to make do.
"How it becomes clear that he is not a woman is not nearly as interesting as how anyone could possibly have thought he was a woman in the first place. He plays a woman as if determined, in every scene, to signal to the audience that he's absolutely straight and only kidding."
— Roger Ebert on Matt LeBlanc in All the Queen's Men
Advertisement:

Somebody passing for the other gender is a common trope in comedy, all the way back to Shakespeare. However, it usually works only if the actor in question actually makes an effort to look and behave like a member of the opposite sex, otherwise the audience's Willing Suspension of Disbelief is broken and instead of being about, say, a man trying to pass as a woman, the work becomes about how a group of morons didn't realize they were trying to pick up a drag queen. Occasionally it works, if applied side by side with Rule of Funny. The trope is gradually becoming less common as it's often been used to mock transgender women who fail to pass and as such has attracted outcry from trans rights advocates. On the other hand, it is still played straight by some Drag Queens as camp to subvert gender role expectations.

And when his disguise is quickly blown by the bad guys, Lug does not take it well...
Lug: Not a woman?!
Madmartigan: Gentlemen...
Lug: NOT A WOMAN?!
Madmartigan: Meet Lug.
Lug: RAAAGH!!