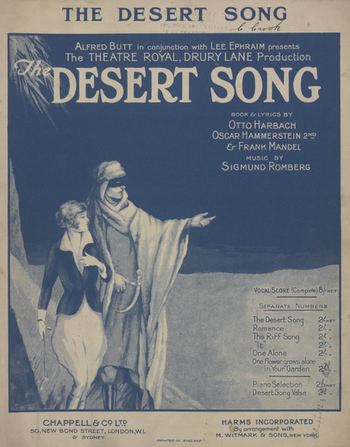 Blue heaven and you and I,
And sand kissing a moonlit sky,
A desert breeze whispering a lullaby,
Only stars above you
To see I love you
— The title song's chorus
Advertisement:

The Desert Song is an operetta with music by Sigmund Romberg and libretto by Oscar Hammerstein II, Otto Harbach, and Frank Mandel. It premiered in 1926 in Wilmington, Delaware, under the title Lady Fair. Its first performance under the title ''The Desert Song" was at the Casino Theatre on Broadway, starring Vivienne Segal and Robert Halliday. It was adapted into a 1929 movie starring John Boles and Carlotta King. It was also made into a movie in 1943, modernised and starring Dennis Morgan and Irene Manning, which has remained unreleased on DVD or video, and in 1953 with Gordon MacRae and Kathryn Grayson.

The plot can be described as The Sheik, with elements of The Scarlet Pimpernel. It was very topical in 1926 as it was inspired by the Rif Rebellion in Morocco, which had ended the year before, as well as by Rudolph Valentino's sudden death. (Hammerstein and Romberg actually witnessed Valentino's funeral procession outside movie theatres.)

Margot Bonvalet, the female lead, is a beautiful, spirited French girl who has come to a French Foreign Legion outpost to marry Captain Paul Fontaine, the second-in-command of General Birabeau, who she doesn't love. Pierre, the General's Dogged Nice Guy son, is in love with her, but Margot's type is, in her own words, "an outlaw and a ruffian". The Legion is pursuing The Red Shadow, a mysterious, Zorro-like figure who wears a red cloak and mask, and leads a band of local desert tribesmen,the Riffs, against French rule. He's actually Pierre, who's been using Obfuscating Stupidity to hide what he's really doing. Margot and Paul's wedding date is moved earlier, due to the Riff revolt. Paul's spurned lover, a local girl named Azuri, schemes to ruin the marriage by revealing the Red Shadow's true identity. Beta Couple Benny and Susan are the subject of a subplot.

In the climax, Margot is kidnapped by the Shadow and taken to the house of Arab Oil Sheikh Ali Ben Ali, where Azuri leads the General, setting him up to kill his own son or for the Red Shadow to lose the respect of his men by refusing to fight the General.

The stage version contains examples of the following tropes:

The 1929 movie contains examples of the following tropes:

The 1943 movie contains examples of the following tropes:

The 1953 movie contains examples of the following tropes.