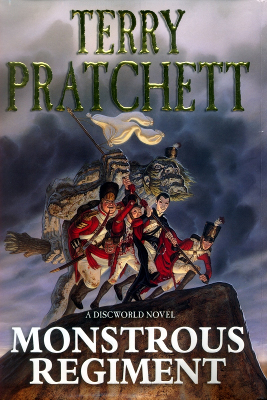 "We know enemy forces are in the area. Currently, they have no boots. But there will be others with boots aplenty. Also, there may be deserters in the area. They will not be nice people! They will be impolite!"
Advertisement:

The 28th Discworld book, and one of the few Discworld books not to center around one of the major character sets (The Watch, Death, Rincewind, or the Witches), though William de Worde from The Truth, Sam Vimes, and a couple of other members of the Watch appear in minor supporting roles. It would also be the last volume to star standalone characters and the last not to focus on either Ankh-Morpork (and the surrounding area), or Lancre/the Chalk.

The setting of the story is the fantastically aggressive country of Borogravia, a constantly-at-war theocracy under the apparently mad god Nuggan, probably the only god on the Discworld to update his holy text almost constantly (mostly with Abominations against things like garlic, the colour blue, and babies). The young heroine, Polly Perks, leaves home, dresses as a boy, and joins the military to find her strong but simple brother Paul, who is the only eligible heir to the family inn and who vanished a year ago after going off to fight the Zlobenians.

Polly signs up under the alias Oliver with an infantry regiment, the Ins-and-Outs, alongside a motley handful of other recruits, including four young humans (who quickly earn the nicknames "Tonker", "Lofty", "Shufti", and "Wazzer"), Carborundum the troll, Maladict the vampire and an Igor. Led by novice officer Lieutenant Blouse and the far savvier (and intimidating) Sergeant Jackrum, the recruits are hurried to the front, learning more than they wanted to along the way about the sad state of their country and the vast alliance mounting against Borogravia.