Literature / The Naked and the Dead 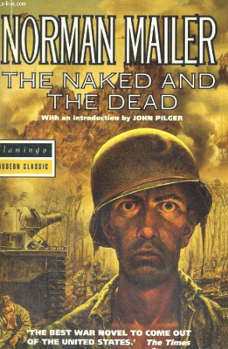 The novel that put Norman Mailer on the map. Written in 1948, The Naked and the Dead is set During the War—specifically, World War II—and is based on the author's own experiences in the Philippines. The story follows a platoon of foot soldiers, led by the sadistic Sergeant Croft, during the campaign for a small (fictional) Pacific island. Meanwhile, a young lieutenant named Hearn is assigned as an aid to the divisional commander, General Cummings, only to learn that Cummings is a Villain with Good Publicity, who maintains a PR facade with his subordinates, especially the enlisted men, but is in reality a cruel tyrant trying to subtly break down the morale of his men to keep them in line. Eventually, both Plot Threads collide and hilarity ensues.

Critically acclaimed, it is notable for its dark, cynical deconstruction of the "Good War", The Squad and numerous other war tropes before they were even clichéd. It is also famous for the use of the word "fug" in-lieu of the normal "fuck". It also utilizes a concept called the "Time Machine", which is a flashback of the lives of the men before the war and further exploration of their characters.

Made into a 1958 movie, directed by Raoul Walsh, starring Aldo Ray as Staff Sergeant Croft, Cliff Robertson as Lieutenant Hearn and Raymond Massey as General Cummings.