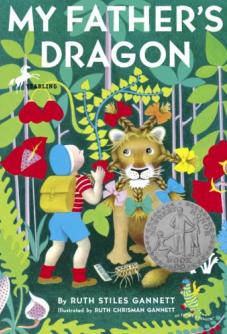 The My Father's Dragon series is a trilogy of children's adventure/fantasy chapter books. The first book, My Father's Dragon, was written by Ruth Stiles Gannett and originally published in 1948. In 1949, it was runner up for the Newbery Medal and was followed by two sequels, Elmer and the Dragon (1950) and The Dragons of Blueland (1951). The books are filled out with whimsical illustrations by the author's mother, Ruth Chrisman Gannett. There is a 1997 anime film based on the series, but it has been largely forgotten and fallen into obscurity.

The story begins with the main character, Elmer Elevator, meeting a scruffy old alley cat one rainy night. In an act of kindness that surprises the cat, Elmer takes her home and cares for her. Though his mother makes him get rid of it, the cat is touched enough by his deed to return the favor. Upon finding out that it has always been his dream to fly airplanes when he grows up, the cat informs Elmer there is a way he can do that now.

Though she is old now, she used to go on many trips exploring the world. One of her last travels took her to a strange and dangerous place known as Wild Island. Populated by various strange and feral beasts, no man dares go to it for fear of what horrors may be in store. One of the most fascinating and saddest inhabitants of the island is a little baby dragon, who hurt his wing and fell out of the sky. Once the animals found him, instead of aiding the dragon, they decided to hold him prisoner and use him as a ferry to cross the river.

Shocked by this, Elmer decides to go a rescue the dragon. With just a few house hold items, he sets out for Wild Island.

You may enjoy the first for free,

Tropes used throughout this series: