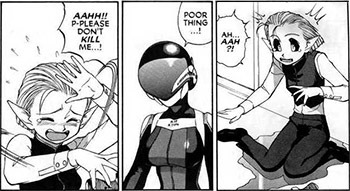 Oopsie...
Cat: Forget Red — let's go all the way up to Brown Alert!
Kryten: There's no such thing as a Brown Alert, sir.
Cat: You won't be saying that in a minute! And don't say I didn't alert you!
— Red Dwarf, "Back in the Red: Part 1"
Advertisement:

With all the monsters, world destroying psychopaths, and clowns out there, the world can be a pretty frightening place. Encounters with these things can weaken not only the resolve of the strongest, but their bladders and sphincters as well.

This is when somebody's response to a scare is to piss or crap their pants, though this may not always be shown. The reasons for using this trope vary, including robbing a particular character of their dignity, as a joke on the extent of their cowardice, or occasionally in an attempt to show just how frightening something is. Most often this trope is used for comedic purposes, but there are a few serious examples as well. Unfortunately, much like the Groin Attack, this trope is played for laughs so often and by itself is so absurd that it's nearly impossible to take seriously when played for drama. The character need not relieve themselves in their pants, but it happens in most of these examples.

Truth in Television as sudden urination or defecation is one of the possible reactions to extreme stress. Scientists are unsure if it is to lose weight before running or to distract the attacker with the smell of the puddle or both, but it can be found in a variety of species. While it happens especially to children and animals (who may lack social awareness of "public release" to begin with), it also frequently happens to adults when confronted with terrifying incidents such as kidnapping, hostage situations, torture or similar.

The title comes from the old joke about the captain who, before any battle, asks their porter to Bring My Red Jacket, so their crew won't see them bleed and therefore lose morale. Eventually, upon happening upon a battle that they have no chance of winning, their porter asks if they should get their red jacket. "Yes...", the captain says, and then, after a moment's hesitation, they add, "...and bring my brown pants as well", the implication here being that they have, or are about to have an unfortunate case of bowel control loss.

Spontaneously defecating or urinating is likely a vestige of the primal "fight or flight" instinct, where some animals do this in the face of danger. This is why the color yellow is associated with cowardice in many cultures, as it insinuates that the person the insult is directed toward would piss themselves if confronted with a situation that required a level of courage; by extension a "yellow-bellied coward" being someone who would piss themselves and crawl through their own waste trying to escape. It is also the origin of the expression "scared shitless", due to sufficiently frightening things being enough to make people void themselves in sheer terror.

For a comedic metaphorical substitute, see Bowel-Breaking Bricks. Compare Potty Emergency, when a character has to go and is desperate to hold on, and Potty Failure, for when they fail. For something that usually comes after, see No Dead Body Poops.

May or may not be related to Oh, Crap!. May result from a Brown Note.

...Yep, you definitely jinxed it.

...Yep, you definitely jinxed it.