Western Animation / A Cat in Paris 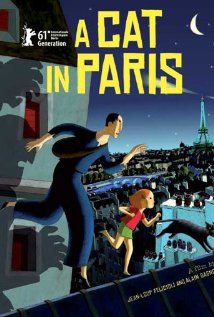 A Cat in Paris (French: Une Vie de Chat) is a 2010 traditionally animated film. It was nominated for an Academy Award for Best Animated Feature.

Zoe, a young girl, has no idea that her beloved cat Dino sneaks out every night to play accomplice to a Classy Cat-Burglar named Nico, and neither does her detective mother, Jeanne. But when a notorious gangster rears his head in the city, these unlikely characters must find a way to stop his plot and gain friendship along the way.

Originally in French it received an English dub with Marcia Gay Harden as Jeanne, Steve Blum as Nico, JB Blanc as Costa and Anjelica Huston as Claudine.