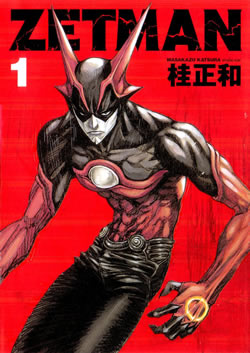 "That boy's a demon. He wouldn't die, even if you killed him."
—Mitsugai Amagi
Advertisement:

Zetman is a manga series created by Masakazu Katsura and was serialized in Young Jump from 2002 to 2014. Though the series was created by the same guy responsible for Video Girl AI and I"s, Zetman is closer to fellow-Seinen series Berserk in its story and art.

The series focuses on two teens, Jin Kanazaki and Kouga Amagi, who combat the demonic 'Players', creatures created, and currently hunted, by the Amagi Corporation. Jin was the last experiment conducted by scientist Gorou Kanzaki, who escaped from the Amagi Corporation when he found out that they intended to exterminate their creations. Though Gorou wished nothing more than for Jin to live out a normal life, he is pulled into combat as a teenager, upon realizing his powers as the eponymous Zetman. Kouga is the intended heir of the Amagi Corporation, and has long dreamed of becoming a superhero due to a childhood love of cartoons and comic books. He eventually does just that using a variety of nifty gadgets, calling himself Alphas after his favorite childhood hero. The two protagonists are often found in opposition to one another due to their conflicting methods and personalities.

The series mainly deals with the spectacularly depressing lives of both characters, and offers up a generally cynical portrayal of the traditional superhero. A lot of attention is also placed on the contrast between Jin and Kouga, who are essentially exact opposites.

An anime adaption has aired as part of the Spring 2012 Anime season.

Has nothing to do with Jetman.