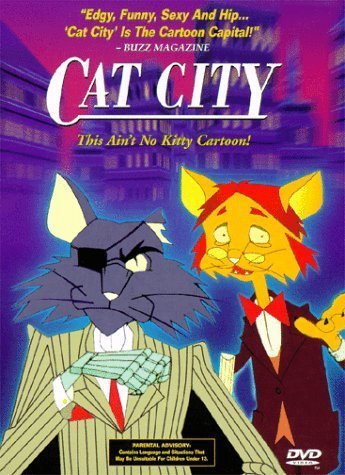 Cat City (Macskafogó) is a 1986 Hungarian animated film created at Pannonia Film Studio about mice being oppressed by cats.

The movie opens with a Star Wars-syle text scroll, which tells the main situation: In year 80 AM Anno Mickey Mouse, the mice of Planet X are threatened by humiliation and total apocalypse. The well-organized, fully equipped gangs of evil cats are aiming to wipe out the mouse civilization totally, not caring for the old conventions between mice and cats. But in the last moment, when the mouse leaders are beginning to consider leaving the planet, a new hope rises...

The film is a parody of several famous feature films, mainly the James Bond series. The main plot is about a special spy who is sent to the city of "Pokyo" to get the secret plan of a machine which could save the mouse civilization. Of course, the cats don't want this to happen, and send some rat gangsters to stop him, who don't always prove as efficient as their presentation showed.

In 2007, the film was followed by Macskafogó 2: A Sátán macskája, a sequel that focuses on a mouse journalist, Stanley, who finds a tribe of untamed cats in the jungles of "Pafrika". The cats summon a demon cat, Moloch, to take the world back from the mice.