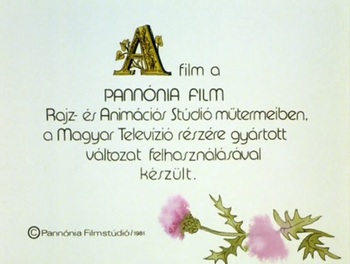 The closing to Vuk the Little Fox
Advertisement:

Pannonia Film Studio (originally spelled as Pannónia Filmstúdió) was a Hungarian animation film company. Being the only animation company in Hungary until the 1990s, it was notable for producing the majority of Hungarian animated shorts, television series, and full-length films, many classic examples of Eastern European Animation (both traditional 2D animation and Stop Motion).

The studio began its work as a division of the Hungarian Film Production Company in the 1950s, becoming independent in 1957. The peak of the studio's work was in the '70s and '80s when it released the films for which it is most remembered. Their animated short The Fly (A légy) won the Academy Award for Best Animated Short Film in 1981. In the 1990s, when numerous western animated shows were imported to Hungary, the company couldn't keep up with the competition. Since then, they haven't produced any big hit, and struggled with financial problems until going out of business sometime around 2015. They were also notable for producing most Hungarian dubs, many of which are fan favorites.

In 2020, the Hungarian National Film Institution, who owns the rights to Pannonia's works, made many of them available to watch for free