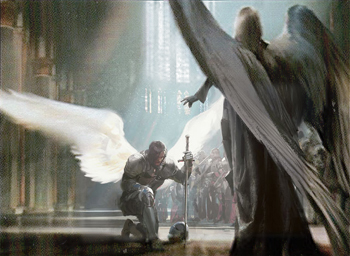 "How do we know which side that bird is on? Why shouldn't it be leading us into a trap?"
"That's a nasty idea. Still—a robin, you know. They're good birds in all the stories I've ever read. I'm sure a robin wouldn't be on the wrong side."
— The Lion, the Witch, and the Wardrobe
Advertisement:

A whole race or culture of fair and benevolent beings. Obviously, inverted Always Chaotic Evil. Sadly enough, not Truth in Television, but that's why these races exist: to show humans that they need to improve themselves.

This alignment is often justified by the race being somehow "close to Light". This trope is certainly very idealistic and is used mostly in shows with Black-and-White Morality. The more cynical shows love to subvert it by revealing they are not as good as they appeared.

Both this trope and Always Chaotic Evil are less frequently used, especially with classical versions of this trope such as angels, elves, and fairies all increasingly portrayed as at best just as fallible as humanity. In extreme cases one or the other can disappear, depending whether the setting says Silly Rabbit, Idealism Is for Kids! or Silly Rabbit, Cynicism Is for Losers!. Either that, or both start to move towards the middle of the moral scale, as the setting becomes grayer in general.

Often a whole race of The Beautiful Elite or an Inhumanly Beautiful Race, since Beauty Equals Goodness. Compare Noble Profession. May be employed with Alike and Antithetical Adversaries. This is a Planet of Hats where the "hat" is being good. For this trope applied to humanity, see Humans Are Good.

Note that before adding examples to this list, just like its evil counterpart, Lawful Good is only the Trope Namer. Also, like Always Chaotic Evil, Always Lawful Good also does not necessarily mean that everybody of the race is of the same good alignment. While a race can literally be Always Lawful Good and apply for this trope, this also extends to races that are also Always Neutral Good and Always Chaotic Good, or races that have Lawful Good, Neutral Good and Chaotic Good individuals, but no evil individuals of any kind.